One year before taking the Dyar’s Canyon job, John had been one of many crowding a pub in Nike’s Lower Cadbury district, and if he hadn’t quite been drinking himself into an early grave, he hadn’t discounted the prospect, entirely.

He’d taken a perch on a rickety stool set before a plank bar made sticky with drinks past, and which caused various sleeves of various drinkers to adhere to the tackier sections of the wood.

The air in the pub had a similar texture, the perfume of bad booze and sour sweat laced with smoke, while the cracked plaster walls thrummed along with the murmuration of voices as they swelled, contracted, rose, and dropped in accordance to the level of enthusiasm of the current speakers.

The war, it seemed, had finally ended.

To his right, a happily drunk young woman in a Corps long coat with an empty right sleeve celebrated the new peace by offering lopsided hugs to everyone in reach.

To his left, a veteran lacking an eye warned anyone who’d listen it’d be a cold day in Morton before you could trust the Coal Farts—like most who’d served, he used the gutter term for Coalition Forces—to keep their word.

John could see merits in both points of view but, somehow, he couldn’t get invested in either.

Instead, he sat and contemplated the shot glass he held up to the overhead pendant lamp. As he studied the glass, he let himself become entranced by the liquor, the way it absorbed the pub’s scanty illumination before releasing it again in a seductive glow that promised more than the purported whiskey had any hope of delivering.

“You gonna drink that?”

John looked up to see Martin Soong, resigned proprietor of the aptly named A Fine Mess. “And destroy the illusion?” he asked.

“What?” Martin asked back.

“Never mind.” John raised the glass in a mock toast before bringing it to his lips.

He was prevented drinking—or, depending on how one looked at it, saved from the ruined illusion—by a rough hand gripping his shoulder and a rougher voice proclaiming, “I know you.”

In one sentence, John felt even the scant light of the tavern go dim. “And here we go,” he murmured before setting the glass on the bar and turning to face his past.

In this case, the past was young —a youth no more than twenty—though the belligerent eyes added a solemnity to the past’s sepia-toned features. “Can I help you?”

The question was mild, but still had the youth releasing his tight-knuckled grip on John’s shoulder. “You are John Pitte, aren’t you?”

John looked from the young man to the giant of a corpsman standing at his side, wearing an infantry long-coat that did little to conceal the ginger mammoth’s muscular bulk.

John wondered if this young and furious past had been seeking him out, and brought this one-man regiment along for backup, or had the pair been slumming in Lower Cadbury and simply stumbled upon him?

Not that it mattered, beyond the level of bruising John could expect from the encounter.

He returned his attention to the youth. “Am I?”

The boy blinked, obviously confused. “What?”

“I mean,” John explained, “you said you knew me, but now you’re asking, which leads me to believe you might be suffering an existential crisis—and you haven’t even had any of Martin’s purported whiskey yet.”

“Hey!” Martin looked up from the glass he was polishing.

“It is you,” the kid said, or more growled. “Captain John Pitte, of the UCF Kodiak. Your picture was in the papers, after Nasa.”

“Laz, hey,” the ginger mammoth said, “I think we should leave.”

“You don’t know what he did!” The kid, Laz, shook free of the calming hand and spun on John. “I do.”

At which point John stopped trying to pretend this was in any way funny. “Hell with it.” He met the furious glare with his own resigned gaze. “Who did you lose?”

Which, again, brought the kid up short. “I—what?”

The young man’s eyes narrowed. “Carver,” he said at last. “She was my sister.”

“Carver,” John repeated the name, then said the rest, “Estelle, Corpsman. Radio operator for the 12th Company, under Colonel Quinn.”

Laz glared, but said nothing. In fact, the entire pub had gone silent, as if the room itself was holding its breath.

“It’s what you want, isn’t it? Some action you can take for her? Some retribution for her loss?” As he spoke, John unfolded himself from the stool. “Come on,” he goaded, oblivious now to the hovering ginger corpsman, to Martin (reaching under the bar for the unlicensed tekkan John knew he kept), to the rising shadows that were the pub’s other customers, bracing for the storm. “I’m giving you one free shot, for your sister.”

John’s head snapped to one side and his right elbow cracked against the edge of the bar.

John straightened, worked his jaw, and brushed the blood from the corner of his mouth. “Nice hook.”

“Laz,” the ginger said again, holding out one hand.

There followed another, shorter silence before Laz took hold of his partner’s hand. Together, they left the pub.

Since any possibility of a brawl left with the young couple, Martin left the tekkan in its place and went back to his customers.

After another beat, John turned back to his waiting drink.

Once again he got the glass to his lips…and was once again prevented from drinking by a firm hand on his shoulder.

“Did you ever consider telling them you didn’t give the order to fire?” the hand’s owner asked.

John looked over his shoulder to see his former first mate. “Jagati.” He noted she was still in uniform. Her hair, however, was loose—something she’d never have allowed on duty.

Then he remembered she’d asked a question. “Why would I tell them that?” he asked in turn.

“Because you didn’t give the order to fire?”

“I didn’t prevent it, either.”

“And still, six soldiers are dead, including that young man’s sister.” He waited for her to bring forth another argument, but it seemed Jagati had grown tired of the fight. And no wonder, as they’d had the same quarrel every time she had tracked him down since the court martial.

Instead, she gave him a long, cool once-over. “Your hair looks lighter than it used to,” she said at last.

“That would be the gray.”

She studied him a moment, lips pursed. “I like it,” she said with a jerk of a nod. “It adds that thing.”

“Thing?” John asked, diverted in spite of himself.

“Yeah, that thing,” she said, waving her hand at his hair. “The thing from the air that makes people pay attention. The heavy thing.”

Martin, passing by, threw her a bone. “Gravitas.”

“Yes!” She pointed at Martin and poked John in the shoulder. “That’s it! Gravitas. You have an air of gravitas now.”

“You’re welcome.” She slid on the stool at his side.

“So,” he said, shooting her a sideways glance, “how’d you find me?”

“I asked your landladies.”

“And my landladies told you, a complete stranger, where to find me?”

Jagati shrugged. “They liked me.”

“They like anything with a pulse. Plus, they’re actively seeking new partners, since their last husband passed in August.”

“Whoa, old school,” Jagati whistled. “I thought most co-families faded out in the fourteenth century.”

“Sadie is a hundred and two, and in point of fact claims her longevity is due to a healthy and varied sex life.”

“Get out.” Jagati propped her elbows on the bar and angled her head to face him.

“I’m serious. I’ve had many a proposition from Sadie.” He’d had more from Sadie and Ronette’s great-great-great granddaughters, but he saw no reason to bring that up.

Jagati closed her eyes. “See, now I’ve got this image stuck in my head which only booze can hope to wipe clean.” She opened them again as Martin approached. “I’ll have what he’s having.”

“No, you won’t.” John held up a hand to prevent Martin pouring out. “Not if you want to retain your stomach lining.”

She raised an eyebrow at the solicitous warning, but nodded. “Fine, give me whatever won’t eat a hole in my stomach lining.”

“Here, break out the good stuff.” John pulled a roll of starbucks from his pocket and peeled a few off. “And none the wiser,” he added, knowing the limitations of Martin’s stock.

Jagati’s second eyebrow rose to join the first, but she said nothing until Martin, after a clandestine shifting of bottles below the bar, produced a thick tumbler with two fingers of the good stuff.

“What should we drink to?” she asked, touching her tumbler to his perennially hopeful shot. “The end of the war?”

“It’s still only a ceasefire,” he pointed out, lifting his drink.

“Not only a ceasefire,” she said, shaking her head. “I put in my papers as soon as the Desmos moored.”

“What?” John lowered the whiskey, untasted. “Why would you… What?”

“Do you want me to use smaller words?” she asked.

“Yes. No. I mean… I always thought you were career Corps.”

“I was,” she admitted, glancing away and giving half a shrug. “Things change.”

He wasn’t so sure about that. “So, what are you going to do?”

“I have a few ideas,” she said with a shrug. “Then again, judging from the starbucks in your pocket, maybe I should go into the smelting business.”

“I don’t think I can picture you in a scrapyard,” he said. “And those starbucks were part of my rent. I expect I’ll be homeless by sunsset tomorrow.”

“As if those sweet old ladies would boot you out,” she countered with another poke.

“Looks can be deceiving. They’re a pair of hornets where cash is concerned, and can you please stop with the—” he stabbed his finger into the air.

“Fine, to the Errant.” He clicked glasses with her. “What is the Errant?”

“She’s the sweetest little light freighter you’ve ever seen,” Jagati explained with an enthusiasm wholly unlike her. “A quad-engine, liquid-aluminum powered blockade runner out of Midas. The Desmos seized her last year,” she explained, leaning on one elbow as she faced him. “That’s how I know she’s still sitting in the Corps impound dock, here in Nike.”

“We’re buying her,” she said at the same time John’s purported whiskey was clawing its way down his gullet, then jumped up with a curse as that same purported whiskey clawed its way back up to spray the front of her jacket.

“What?” he asked as she brushed her jacket. “We’re what?”

“We are buying the Errant and going into business together,” she said with the care of one speaking to the terminally slow. “I told you I had an idea.”

He sighed. “I need another drink.” 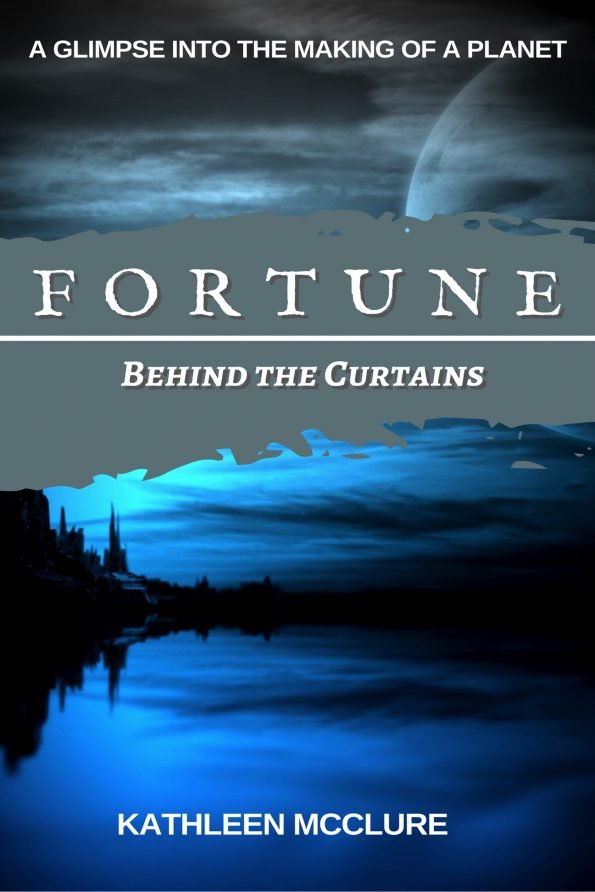 Don't want to wait for the next chapter?
Click HERE to purchase Outrageous Fortune!

READ ON A KINDLE? (Or just want to support the authors?)