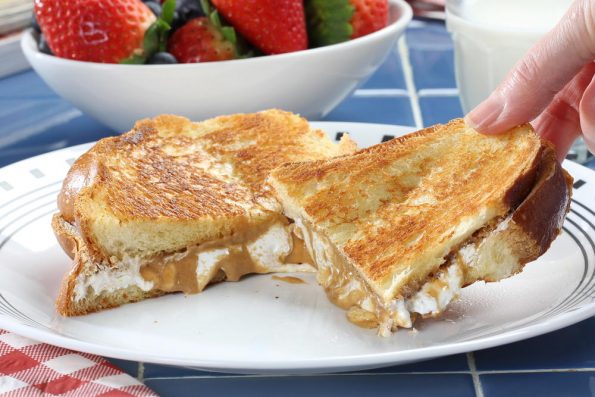 Here's another from The Libra Gambit's editing room floor, and one which includes references to possibly the most comforting food I have ever known (says the person with no nut allergies), the grilled peanut butter and marshmallow sandwich, also known as the fluffernutter sandwich.

Side note, the fluffernutter tends to use marshmallow cream, but my family always used actual marshmallows. I find the melt factor of real marshmallows to be superior to the already gooey cream. Your mileage may vary.

When a warm moment stops the plot cold

Harry watched Ray walk away, and looked at his daughter, for the first time realizing how clearly he could read that particular version of a blank expression.

Then she turned that blank expression on her father, where it sharpened considerably. “You are hurting,” she said.

He appreciated that she kept her voice low enough no one in the forward nook could hear the comment.

He shook his head, picked up the abandoned mug from the counter. “I may have twerked my back some during that crazy Ivan,” he told her. “It’ll be okay.”

“I think your version of ‘okay’ and everyone else’s are light years apart,” she said.

She arched a brow, much as Mo had at Ray.

Feeling suddenly awkward, he set his mug down, turned it on its axis a few times.

“Father…” she began, then paused, as if uncertain what to say.

“Daughter.” He glanced up from his mug to see her head tilted in the same way his did when he was trying to size up a problem. “It’s fine,” he told her. “Really. The pain’s mostly gone, now.”

“I am going to borrow a bit of your attitude and assume that to be true,” she said. “But only because I am more concerned about the other pain.”

He felt himself go still as he looked at her. His child, whom he’d known for less than a month. “You’ll need to be more specific.”

“Maybe pain isn’t the right word,” she murmured, wrapping her hands around her mug of tea. “Displacement, perhaps.”

“It isn’t, but not that  kind of displacement.” She paused again, and the two looked at each other with nearly identical eyes. “You know,” she said, after a beat, “we broke several planetary and interplanetary laws back on Suresh.”

“Yes. That,” she said, and the coolness of her tone brought Fayla Szado to mind. “Needless to say, we are going to be breaking more laws, moving forward.”

“And yet, you’re saying it.” He gave the mug another half-turn, then leaned back in his chair. “Yes,” he said, his own voice low enough to be ignored by the three currently exclaiming over some byte of data Mollin had just brought up. “I know we’re going to be trampling any number of laws, regulations, and statutes, getting your mom out of Libra.”

“Something that might be difficult, for a man who has spent his life upholding those laws, regulations, and statutes,” she pointed out.

“Mostly the laws and regulations,” he told her. “I never had much respect for statutes.”

He sighed. “I know,” he admitted. “And the truth is, it’s oddly freeing, knowing that. Not in an ‘ends justify the means’ kind of way but more, ‘the law doesn’t have all the answers’ kind of way. Kind of how the Duchess works,” he added, glancing forward, to where Mo leaned over Mollin’s shoulder.

“You’re familiar with her work?”

“Let’s just say some her crew’s more creative exploits may have made the morning briefings while I was a marshal.” He met her eyes. “I made sure I wasn’t on the docket for those cases.”

He shrugged. “As far as I could tell, she was only fleecing people who deserved it, so why not let karma take its course?”

“I’m not certain the Inter-stellar Marshal Service would have had the same outlook,” she said with the hint of a smile. “But I think the Mother would be pleased with that reasoning. Still,” she sighed, “I don’t know if karma is on our side of this action.”

That had him leaning forward. “Do you think we’re wrong to go after your mother?”

“No. That is—no,” she said, her voice edging towards uncertainty. “But even if we find a way to get her out of that place, I…it’s been so long,” she said, her hand rising in a vague gesture.

“Yes,” he agreed, suddenly understanding. “Yes, it has.”

“We’ve all changed,” he said, barely recognizing the lie as he reached across the table to take her hand in his. “I don’t imagine Siane will be any more prepared for what’s coming than we are, but that won’t stop me going after her.“ It was said mildly enough, but the sharpening of her gaze told him she felt the urgency, the bone-deep necessity, that drove Harry towards Libra.

“Tell me something about her,” Jessyn said, squeezing his hand. “One thing you remember.”

“Just the one?” Harry looked down at their joined fingers, thought a moment, then looked up. “Okay, here’s one—she never hit the imaginary brakes.”

“You know how ground and low-atmo vehicles—skimmers and such? Whenever there’s a traffic stop, or someone cuts you off in traffic, whoever’s sitting in the passenger seat automatically stomps on the imaginary brakes. People can’t help it, because no matter how much they trust the driver, they can’t know they’ll stop in time, so their foot stomps the floor where the imaginary brake would be.

“My sister’s wife? Champion imaginary braker; practically puts a hole through the skimmer deck when I’m driving.” He paused, met his daughter’s gaze. “But your mother? She never hit that imaginary brake. Not once. Not even when I took her off-roading on Titan.”

“Because she could feel what you were doing,” Jessyn murmured. “She was in tune with your actions.”

“She was in tune with everything,” he said simply. There was a slight pause, then he shook her hand. “Okay, that was mine. What about you?”

Jessyn didn’t hesitate. “Peanut butter and marshmallow sandwiches, toasted so everything became melted and delicious.” She smiled at the memory. “She made them for me, whenever I needed comfort. Eineen thinks they’re disgusting, but Tahna, Caro and I make them every chance we get.”

“I taught her how to make those,” Harry said, then cleared his throat. “My mom swears they’re an ancient family recipe. I made them for your mother. I made them a lot after she got pregnant.” He paused, looked over to the murmuring huddle by the compcomm. “We’re going to get her back,” he said softly. “I don’t care how many laws, statutes and regulations get flattened. We’re getting her back.”

“I believe that.” Jessyn looked down at their linked hands. “I believe a great deal more, since you and Ray came to Ócala.”

“Me too,”Harry said, leaning over to drop a kiss on the wild curls, still damp from the shower.