Okay—this week is a little wonky. Like, I lost track of which days I was supposed to post which chapter of which book wonky. 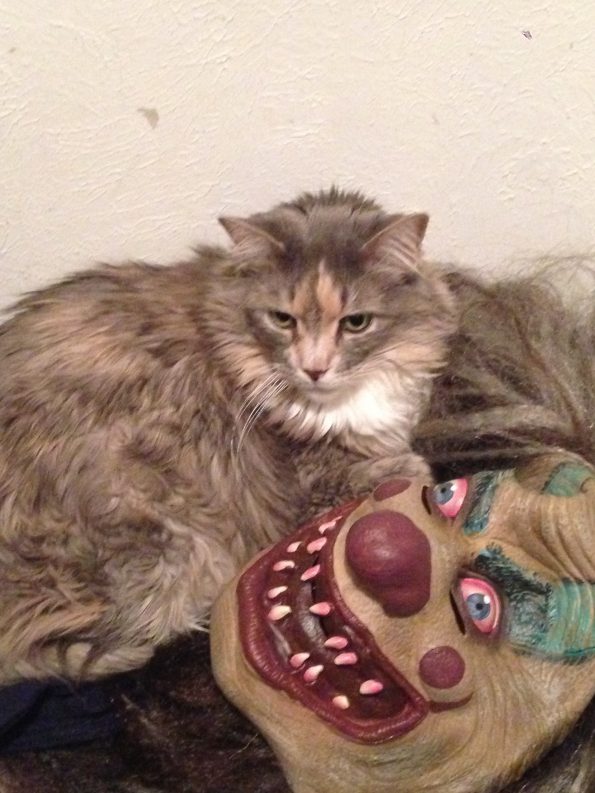 Mostly because since last Friday, I have flown to and from another state (in two days!), then come home to an aged and ill cat who we're at the "coaxing to eat" stage of life. In fact, I am taking her to her second vet appointment of the week, so we can do what we can to make her comfortable until it's time to say goodbye.

Small aside: Some of what makes her comfortable is a Pain Killer AKA Controlled Substance AKA I feel like I'm in an episode of House when they're unlocking the drawer.

Above is a pic of Serena in her spryer days, snuggling with the clown mask my spouse had for—reasons (I try not to speculate).

So basically, yeah, a wonky week. Not entirely unproductive, however, as we're moving towards all three OF authors having a hand in the website, so you can get to know all of us, better.

We have the first-in-series posting on Wattpad as well, for folks who like that platform. I got new landing pages and a newsletter template built on the old/new email host, so we'll be ready to send straight off when we move house at the end of January.

On that note, I sent out the first newsletter in over six months, which you may read if you're interested, though mostly it restates what has already been posted here.

And, because it's a thing now, here's the past week's fiction word counts:

I also spent some quality time walking, driving, and asking questions about the stories, such as: Why is so and so doing such and such? (I'm pretty sure I know, now). Is this really where the fight breaks out?  (Answer, no. It breaks out in the next chapter). Can I explore linguistics IN the story? (Yes. Cautiously). When should I start the Libra Gambit reading aloud? (Next week because-travel lag and cat).

As I pointed out in last week's update, for my brain, a lot of the writing happens away from the chair.

I also finished reading Becky Chambers' Record of a Spaceborn Few and Galaxy and the Ground Between (long flights, longer layovers), and loved them both (see my review of Record on Bookbub). I'm rereading Leap Year by Helen Russell (kind of a January tradition by now), and started The Nine, an urban fantasy by C.G. Harris with a dark sense of humor and a relatable protagonist.

And that's where we are this week—pretty much juggling the creative life with life—and easing forward with multiple projects.

There was also, perhaps, a little more chocolate consumed than the usual.

As always, thanks for checking in and looking forward to seeing you next week.

PS: If you are enjoying your time here, consider clicking that wee little star at the bottom of the post, or sharing our site with your friends.

Enjoying what you read and want to say thanks?