Though I suppose, in this case, shaking the firmament is more along the lines of starting a Kickstarter-quake.

For those who've missed the news, it appears Brandon Sanderson, who is no stranger to Indie publishing, broke Kickstarter's record when he started up a campaign to fund four new books, to be released quarterly in 2023. 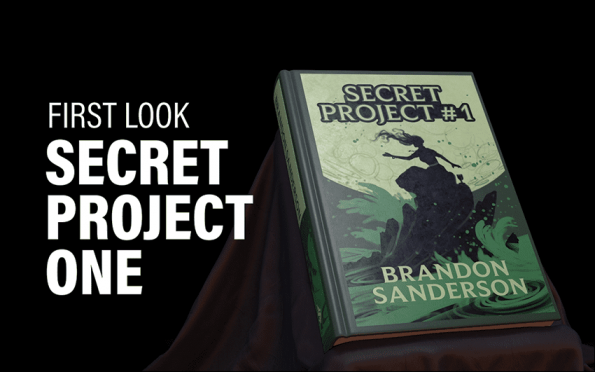 And it makes sense to me that he's doing this. He's a prolific, wicked talented writer who has published indie in the past, and is possessed of a keen business IQ as well as his own company.

But even more interesting, he is—according to this New York Times article, trying to challenge Amazon.

Those keeping up with my prior posts will understand why this goal appeals to me.

Of course, Brandon is challenging the status quo in a far more impressive fashion than we here at Outrageous Fiction could hope to, as one would expect of a (again) very prolific and beloved author. (Wax and Wayne, FTW!)

So, yes. Brandon's doing a big thing, in a big way.

I have no doubt he will produce amazing, gripping, page turners.

What I hope is, he will also get people to think differently about how and where they invest their reading dollars.

And jumping off that oh-so-handy springboard (again, thanks, Brandon!) you may have missed the several, cunningly placed indicators that the Outrageous Fiction authors have a Buy Me a Coffee page, which includes opportunities to, well, buy us a coffee, or to become annual or monthly members.

The money earned from BMC is currently earmarked for covering editing, copyright, paperback, and cover fees. (As a For-Instance, we are trying to raise $700 to cover the production expenses of The Libra Gambit).

Is it as impressive a goal as Brandon's?

But it is in the same vein.

We all want to tell our stories, to reach readers, to make someone's day a little better.

We would also, at the least, like the stories to pay for themselves.

At the most, we would like them to provide us a decent living, as well as supporting the freelance editors, proofreaders, and cover designers who also seek to make a decent living.

It's true, getting from the least to the most won't be easy (and for all the wow factor, Brandon Sanderson's Kickstarter is the result of many years of continuous work).

At present, our email subscriber list is roughly 1400 individuals. We have six members and eleven supporters on Buy Me a Coffee (thanks y'all!), and I consider it a good day when five distinct visitors stop by to read on this website.

But here's the thing, I feel no shame in those numbers.

It takes time and consistent effort to build a community, and we are, all of us, just feeling our way through the dark, even as we try to spread a little light.

On the subject of spreading light, I just started reading Austin Kleon's Keep Going which is as pleasantly bolstering as his previous works, Steal Like an Artist and Share Your Work (you can see some of the advice on Sharing happening right here!)

Keep Going was just the book I needed to read this week, when I was stuck in the sense that nothing I do matters.

If, by chance, you're already in that very large club, or considering signing up, take a peek at Keep Going. It's not earth-shattering, but it is kind, and sometimes that's all a brain needs to wake up and do it all again.

Last note of the day: Those who visit Buy Me a Coffee will also see that members of any level are automatically entered into a monthly drawing to ask one character or author a question.

February's winner*, Maximusace, had a question for Gideon Quinn, of the Fortune Chronicles, Gideon Quinn Adventures.

Question: How many mugs has Elvis broken by knocking them down?

Mostly, this is because we used tin cups in the Barrens—where the Powers That Be wouldn’t risk anyone getting their hands on a sharp piece of ceramic.

But I think it’s also due, at least a little, to the fact, one time when he was still a draconette, he came too near a cup of hot tea and scalded a toe.

That said, he will chomp on any chopsticks he finds laying around. I think it’s a beak sharpening thing.

Or he just likes the taste of bamboo.

*February's drawing was impacted by first, being a wicked short month and second, by a significant uptick of hours required by the "day job".

This website is ad free, and depends upon the generosity of its readers (that’s you!) to keep posting, so if you are enjoying, please Like, Subscribe, or Share on your favorite social platform, using the handy buttons below. Lastly, if you have the means, you may buy the authors a coffee. Or buy an ebook. Every little thing helps.
Thanks!